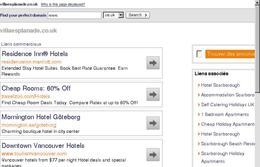 Villa Esplanade Limited can be found at Leeds at Third Floor. You can find the firm by the zip code - LS1 5QS. Villa Esplanade's launching dates back to 2008. The company is registered under the number 06603160 and its current status is voluntary arrangement. This business's declared SIC number is 55100, that means Hotels and similar accommodation. Its latest accounts describe the period up to 2015/05/31 and the most current annual return was filed on 2015/05/27.

The company has one director at the moment running this business, specifically Alastair T. who's been carrying out the director's responsibilities since 2008-05-27. This business had been guided by Mark T. until September 2013. In addition another director, including Joan T. quit in 2010.