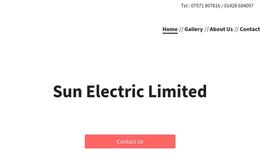 Sun Electric started conducting its business in 2009 as a Private Limited Company under the ID 07088633. This business has operated for twelve years and the present status is active. The firm's registered office is located in Haslemere at Dell Farm. You could also locate the company using its postal code : GU27 2EN. The enterprise's Standard Industrial Classification Code is 42220 - Construction of utility projects for electricity and telecommunications. 2020-11-30 is the last time when the accounts were filed.

For the company, all of director's assignments have so far been carried out by Paul R. who was arranged to perform management duties in 2009 in November. Since January 2010 Andrew C., had been managing the company until the resignation eight years ago. To help the directors in their tasks, the company has been using the skills of Christine R. as a secretary for the last twelve years.