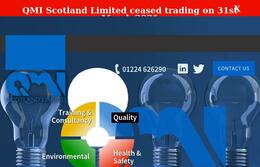 Qmi Scotland Limited may be contacted at Suite 1, 3rd Floor, 11-12 St. James's Square in London. Its postal code is SW1Y 4LB. Qmi Scotland has been actively competing on the market since the company was started on Wed, 1st Aug 1990. Its registered no. is 02526956. Founded as Qmi (north Sea), it used the business name up till 1994, at which moment it was replaced by Qmi Scotland Limited. This company's declared SIC number is 82990: Other business support service activities not elsewhere classified. 2019-12-31 is the last time the accounts were filed.

In the company, the full scope of director's tasks have so far been carried out by Margaret J. who was designated to this position seven years ago. The company had been guided by John D. up until 2008. As a follow-up another director, namely Allan S. resigned 21 years ago.

Margaret J. is the individual who controls this firm, owns over 3/4 of company shares.