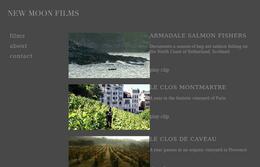 The firm referred to as New Moon Films was founded on 1995-07-11 as a Private Limited Company. This company's office can be reached at London on The Studio, 126 Greencroft Gardens. Assuming you need to reach this firm by mail, the post code is NW6 3PJ. The reg. no. for New Moon Films Limited is 03078262. This firm known today as New Moon Films Limited, was previously known under the name of Solarshow. The change has occurred in 1995-08-10. This company's Standard Industrial Classification Code is 59112 : Video production activities. 31st December 2019 is the last time when company accounts were reported.

Taking into consideration the company's constant growth, it was vital to appoint other executives: Amanda P. and Stephen M. who have been working together for twenty six years to promote the success of this firm.

Amanda P. is the individual who controls this firm, owns 1/2 or less of company shares.

Free Download
Accounts for a dormant company made up to 31st December 2019 (AA)
filed on: 15th, June 2020
accounts
Free Download