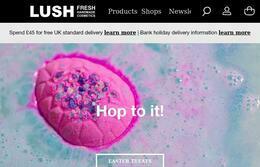 Lush Cosmetics came into being in 2001 as a company enlisted under no 04162033, located at BH15 1AB Dorset at 29 High Street. The company has been in business for 20 years and its official state is active. Launched as Steelray No.164, this business used the name up till 2001-03-19, at which point it got changed to Lush Cosmetics Limited. This enterprise's declared SIC number is 70100 meaning Activities of head offices. June 30, 2020 is the last time when account status updates were filed.

Having two job advert since Saturday 9th September 2017, the enterprise has been relatively active on the job market. On Monday 26th February 2018, it was searching for new employees for a part time Sales Assistant post in London, and on Saturday 9th September 2017, for the vacant post of a part time Production Assistant in Nuffield Industrial Estate.

As mentioned in the following firm's register, since December 2014 there have been three directors: Karl B., Mark C. and Margaret C..