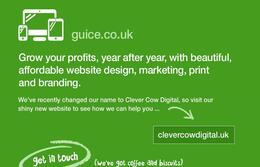 Guice came into being in 1999 as a company enlisted under no 03797276, located at RH1 6EL Surrey at 81 Tylehurst Drive. This company has been in business for 21 years and its last known status is active. Launched as Grape Solutions, this firm used the business name up till 2000, the year it was changed to Guice Limited. This enterprise's Standard Industrial Classification Code is 62090 which stands for Other information technology service activities. Its most recent accounts describe the period up to 2018-06-30 and the most recent confirmation statement was submitted on 2019-06-28.

According to the latest data, we have only one director in the company: Giles P. (since 10th December 1999). Since 10th December 1999 Richard H., had been functioning as a director for the business up to the moment of the resignation in January 2003. In order to support the directors in their duties, this specific business has been utilizing the skills of Sophie P. as a secretary since 2004.

Giles P. is the individual who has control over this firm, has substantial control or influence over the company, owns over 3/4 of company shares and has 3/4 to full of voting rights.

Notified on 29 June 2017
Nature of control:
over 3/4 of shares
3/4 to full of voting rights
right to manage directors
substantial control or influence