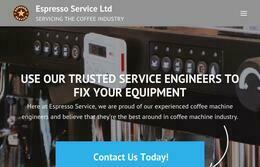 This company is widely known as Espresso Service Limited. The company was started seventeen years ago and was registered under 04985995 as its reg. no. The headquarters of the firm is registered in Clevedon. You may visit it at Suite 2 Bellevue Mansions, 18-22 Bellevue Road. This firm is known as Espresso Service Limited. However, this company also operated as Lawgra (no.1075) until it was replaced seventeen years from now. The company's declared SIC number is 96090 meaning Other service activities not elsewhere classified. 2018-04-30 is the last time when the accounts were reported.

On 2015-07-09, the firm was searching for a Coffee Machine Service Engineer to fill a full time position in the engeneering in Ashford, South East/Southern. They offered a full time job with wage from £10.3 to £13.3 per hour. The offered position required no experience and a CSE or its equivalent. In order to apply for the position, the candidates were supposed to email the company at the following address: rmarshall@espressoservice.co.ukincluding job offer number Ashford.

1 transaction have been registered in 2013 with a sum total of £583. In 2012 there was a similar number of transactions (exactly 1) that added up to £1,333. Cooperation with the Hartlepool Borough Council council covered the following areas: Purchase Fixtures & Fittings.

Currently, we can name a single managing director in the company: Luigi S. (since Fri, 23rd Apr 2004). Since 2005 Simon S., had been supervising the limited company up until the resignation on Mon, 3rd Aug 2009. In addition another director, including Jonathan T. resigned in March 2005.

Luigi S. is the individual who has control over this firm, owns over 3/4 of company shares and has 3/4 to full of voting rights.

Notified on 6 April 2016
Nature of control:
over 3/4 of shares
3/4 to full of voting rights
right to manage directors

EspressoServLtd has over 11 tweets, 45 followers and follows 0 accounts.