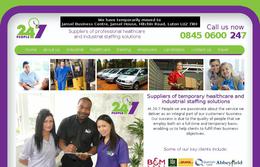 24-7 People started conducting its operations in 2010 as a Private Limited Company with reg. no. 07307955. This firm's head office was based in Luton at Jansel Business Centre Jansel House. The 24-7 People Limited firm had been in this business for 9 years.

Mark A. was this particular firm's director, appointed in 2011 in July.

Notified on 8 July 2016
Nature of control:
substantial control or influence

Notified on 8 July 2016
Nature of control:
substantial control or influence