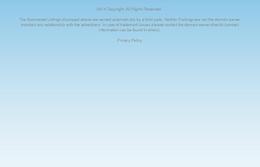 Edwina K. and Victoria A. were listed as company's directors and were running the company from 2011 to 2014.

Financial data based on annual report