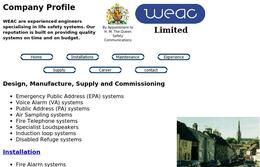 Weac Limited can be reached at Neville House, Station Road Wendens Ambo in Saffron Walden. The post code is CB11 4LB. Weac has existed on the British market for twenty three years. The reg. no. is 03520576. Founded as Notsallow Ninety-four, the firm used the name until September 29, 1998, then it got changed to Weac Limited. This firm's SIC code is 82990 which stands for Other business support service activities not elsewhere classified. 2019-06-30 is the last time when the accounts were filed.

For this company, the full scope of director's assignments have so far been fulfilled by Jeremy B. who was formally appointed in 1998. This company had been managed by John P. up until June 30, 2005. Additionally a different director, including John B. gave up the position in March 2010. To provide support to the directors, this specific company has been utilizing the skills of Tracey T. as a secretary since the appointment on January 11, 2011.

Jeremy B. is the individual with significant control over this firm, owns over 3/4 of company shares.