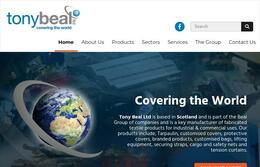 Tony Beal Limited is located at Glasgow at 18 Station Road. You can look up the firm by its post code - G69 7UF. Tony Beal's founding dates back to year 1979. This business is registered under the number SC067541 and its official status is active. This company's Standard Industrial Classification Code is 32990: Other manufacturing n.e.c.. Its most recent filed accounts documents describe the period up to 2020/04/30 and the most recent confirmation statement was filed on 2020/10/29.

Having four recruitment announcements since June 12, 2014, the firm has been active on the employment market. On September 22, 2014, it started searching for candidates for a full time Customer Service / Retention Advisor position in Glasgow, and on June 12, 2014, for the vacant position of a full time Telesales Team Leader in Baillieston. They seek candidates on such posts as: Sales Consultant / Van Driver or Van Driver (Transit) Aberdeen- Dundee.

The trademark of Tony Beal is "Sterling". It was submitted for registration in November, 2013 and it appeared in the journal number 2014-007.

At the moment, there’s a single managing director in the company: David B. (since 3rd October 2007). For nearly one year Simon B., had performed the duties for this specific company until the resignation in 2007. As a follow-up another director, specifically James B. resigned in October 2007.

David B. is the individual who has control over this firm, owns over 3/4 of company shares.