No Work All Play Ltd

No Work All Play Limited 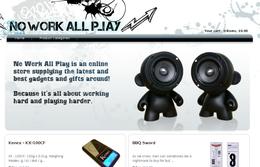 No Work All Play Ltd may be reached at Alberminster House, 38-40 Sydenham Road in Croydon. Its postal code is CR0 2EF. No Work All Play has been present on the market since the firm was started in 2004. Its registered no. is 05152399. This firm has been on the market under three names. Its initial listed name, Os 17, was changed on Tuesday 19th October 2004 to Uk Skunkworks. The current name is in use since 2011, is No Work All Play Ltd. The firm's Standard Industrial Classification Code is 47910: Retail sale via mail order houses or via Internet. 2015-12-31 is the last time company accounts were filed.

At present, there’s a single managing director in the company: Max M. (since Tuesday 12th October 2004). Since 2013 Sammy B., had been managing this specific company till the resignation in 2013. Additionally another director, including Max M. quit 8 years ago. In order to find professional help with legal documentation, this particular company has been utilizing the skills of Max M. as a secretary for the last ten years.