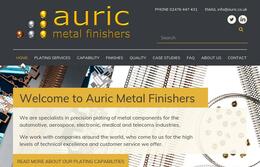 Auric Metal Finishers Limited has existed on the British market for at least 41 years. Started with Registered No. 01476891 in 1980, the company is registered at Herald Way, Coventry CV3 2RP. The company's registered with SIC code 26301 - Manufacture of telegraph and telephone apparatus and equipment. March 31, 2020 is the last time the accounts were filed.

With three job announcements since July 2, 2014, the corporation has been relatively active on the job market. On October 3, 2014, it was recruiting job candidates for a full time Electroplater post in Coventry, and on July 2, 2014, for the vacant post of a full time Maintenance Technician in Coventry. So far, they have searched for candidates for the Quality Inspector positions.